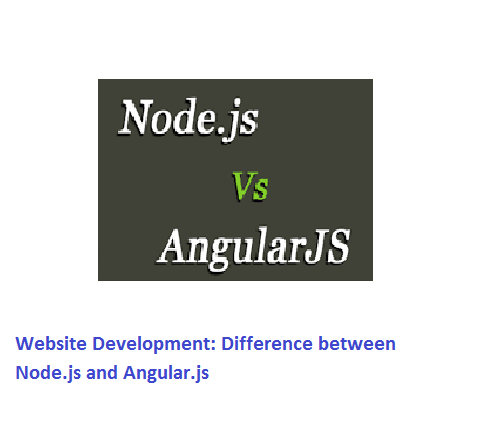 Node.js is an open-source server framework that runs on a variety of Web Application Development on platforms including Windows, Mac OS X, Linux, and UNIX. It is built on Google Chrome’s V8 JavaScript engine and has features like event-driven and non-blocking I/O model, which makes it lightweight and efficient. Contact Sovereign Software for Website Development services.

Angular is an open-source, client-side framework launched by Google in 2009. It is mainly used for building single-page applications as well as applications having separate functional layers. One of the biggest benefits of Angular is that it binds data using Expressions and extends HTML attributes with Directives. This, in turn, helps developers in adding dynamic views to web apps.

Both Node.js and Angular are different from each other in many ways. They’ve their own specializations and sets of benefits for web application development. So, let’s see how both these JavaScript platforms play different roles.

AngularJS was developed by Google as a web application development framework. Unlike other JavaScript frameworks, Angular is written completely in JavaScript. It even follows JavaScript syntax rules. On the other hand, NodeJS was developed as a cross-platform runtime environment based on Google’s V8 JavaScript engine. It was written in a number of programming languages – JavaScript, C, and C++.

Working with data
Angular supports two-way data binding to keep the data between a web app’s model and view synchronized automatically. However, Angular does not provide any sort of feature for writing database queries. Node.js, on the other hand, lets developers generate database queries directly in JavaScript. This, in turn, makes it easier for developers to create database queries even in non-relational databases like CouchDB and MongoDB.

Use Cases
AngularJS is used widely by JavaScript developers for building single-page and client-side web application development. The features provided by the web framework further make it easier for programmers to write interactive and real-time applications. On the other hand, NodeJS is used widely by developers for building fast and scalable server-side and networking applications. The features provided by the cross-platform runtime environment even help developers to build applications that require real-time collaborative drawing or editing.

Both Node.js and AngularJS platforms are targeted at building web applications using JavaScript. However, both of them are different in their architecture and working. Node.js mainly used to build server-side applications. AngularJS is suited for building single-page client-side web application development.