Blog / Software Development / What is Waterfall Methodology and its Phases? 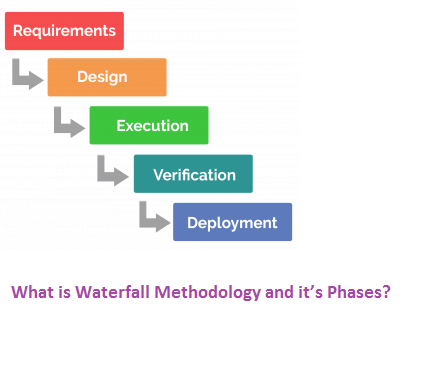 What is Waterfall Methodology?

Waterfall Methodology is the most popular version of the systems development life cycle (SDLC) for software engineering and IT projects. It proceeds through a sequential, single-direction process that flows like a waterfall. Waterfall Model is a sequential model that divides software development into pre-defined phases. Each phase must be completed before the next phase can begin with no overlap between the phases. Each phase is designed for performing specific activities during the SDLC phase. It was introduced in 1970 by Winston Royce.

The Waterfall methodology is broken into seven stages, and each stage is completely dependent on the previous ones. This process can be planned using a Gantt chart, which is a linear bar chart that shows the start and end dates for each task. The seven stages of Waterfall include:

Initiation: Once the idea is created, the project team is hired and objectives, scope, purpose, and deliverables are defined. No coding takes place during this phase, but the team establishes specs such as programming language or hardware requirements.

Requirement gathering and analysis: A feasibility analysis is conducted for the project and documented in the requirement specification document. By the end of this phase, the project requirements should be clear, and you should have a requirements document that has been distributed to your team.

Design: Design specifications are created, studied, and evaluated in an effort to understand what the final product should look like, along with the actions needed to get there

Implementation/Coding: The coding of the software actually begins. All previous planning is put into action during this phase. They typically implement code in small pieces, which are integrated at the end of this phase or the beginning of the next.

Testing: After the coding is completed, testing is performed to ensure that there are no errors before the software is delivered to the customer. An optional user acceptance test (UAT) can also be performed, where users try the software before distributing it to the greater public. Testers methodically find and report any problems. If serious issues arise, your project may need to return to phase one for reevaluation.

Maintenance: This phase relies on the customers to report on any additional issues that may have been encountered in the real world. The development team works to solve and modify the software based on this feedback.