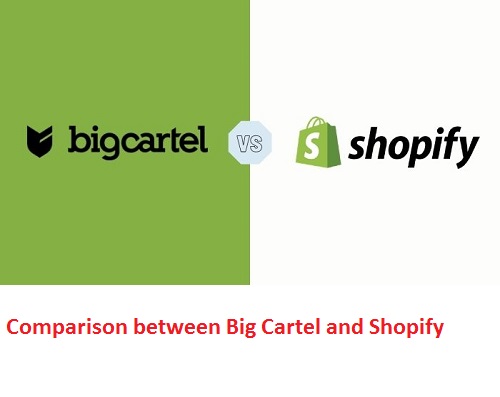 If you are a beginner in the field of eCommerce and want to hit the floors, you will be curious about what kind of platform best serves your needs. You’re probably reading this because you’re in the process of choosing an appropriate eCommerce platform to launch or convert. Therefore, we’ve put together this detailed analysis of BigCartel and Shopify comparison. The Big Cartel and Shopify debate is an important one for anyone venturing into the world of eCommerce. Both Shopify and Big Cartel allow users to create an online retail store with features, including marketing, shipping, billing, and CRM tools.

Big Cartel is indeed a reputable cloud-based shopping cart solution, which comes with a host of decent eCommerce features. Although many people have compared it with Shopify, Big Cartel concentrates on a completely different market. It has explicitly focused on creatives and artists since 2005. Big Cartel is mainly aiming to support small-scale businesses. Big Cartel currently powers over 50,000 websites. That’s quite a less number than Shopify’s as Big Cartel is preferred by bloggers, individual artists to sell their products as well as small business merchants. It is only in Big Cartel that in its Gold plan it allows the sellers to sell free without giving any monthly fee perfect for a starter to sell their few products with good features of Big Cartel.

Shopify is known as the industry’s top eCommerce platform as it achieved a high score in every factor compared to other platforms, particularly with BigCartel, except for the price. The solution, which is a website designer, was launched in 2006, even though the firm was officially established in 2004. Still, as an online SaaS solution, Shopify did not start making profits until the year 2008. Moreover, Shopify is a more powerful tool for eCommerce and can be used to keep up with entrepreneurs or organizations of any scale. Shopify has strongly established its position today in the world of digital distribution. It is a network integrating web hosting capabilities with a wide range of features such as shopping carts, also including numerous integrations from third parties. Shopify also offers users an array of applications from its app store, which is one of the most compelling features with the marketplace of over 1100 apps and plugins. There are also apps expanding Shopify’s capabilities and enabling it to integrate directly with all sorts of external platforms. Right now, Shopify has hosted over 200,000 web stores and that number is increasing steadily. Shopify has been the favorite choice of the industry after a promising IPO earlier this year.

If you are serious about building an eCommerce website and business, then Shopify is definitely the winner out of the two as it not only provides a complete website builder but also comes with lots of features for eCommerce and more. It is also scalable as there are bigger packages and the platform is built to handle businesses of all sizes and if the standard features aren’t enough, then the App Store will probably have the answer for you. Big Cartel isn’t a bad platform but it feels a bit incomplete and while it is an option for a small, boutique-style, or some other small scales business. You may find that if the website takes off that you quickly outgrow it.

We provide a range of solutions from simple shop fronts to fully integrated E-commerce and WooCommerce solutions. For more details on ecommerce development services Contact us at mailto:hello@sovereignconsult.com